The Joy of Typewriting 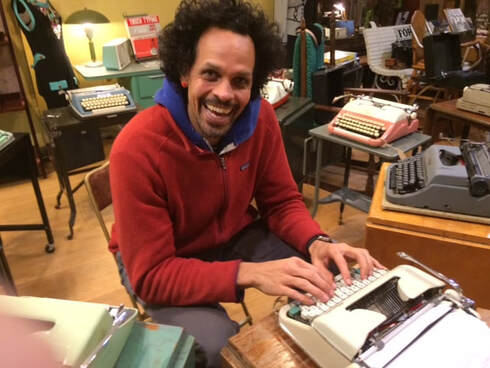 Ross Gay, the poet and professor at Indiana University, settled on two typewriters for his collection after wheeling around our typewriter circle several times.
​    He is the author of Catalog of Unabashed Gratitude, winner of the Kingsley Tufts Award and a finalist for National Book Award and the National Book Critics Circle Award for Bringing the Shovel Down.
"I want to realize joy as a fundamental aspect of our lives and practice. It is a discipline."

​The Alphabet Brought Us Together 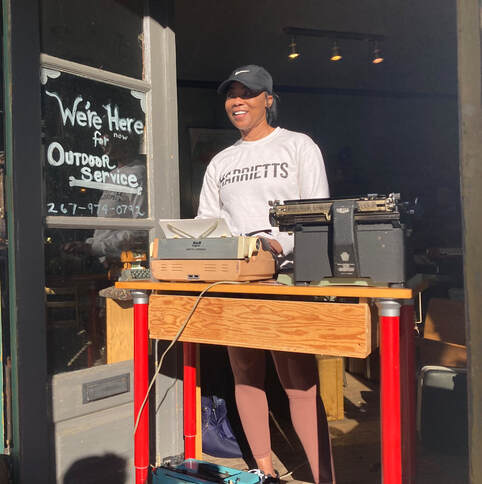 We showed Tiffany Courtney a little trick to center the title on a page, on the Coronet she had settled on:  Center the carriage, then backspace every other letter in the title.  The number of letters in the title will then be halved.
"Why did you use [the word] 'Mississippi'?"  she wanted to know.  "I'm from Mississippi."
We recalled it was a fun word to roll off the tongue, as a child.
Tiffany then chanted how she learned to spell her State's name -- see title above.  Mrs. Carter, kindergarten teacher in Greenville, thank you!
Tiffany then shared some of her family's history.
"I was born after the last Civil Rights Act was passed.  '69.  Greenville was segregated, but it also had the first integrated school in the South, Colman.  It was the only city in Mississippi that did not have its own Klan. We had 'our own library, our own pool'.  I grew up with excitement and joy.  It was the best 'equal' we could have under 'Separate but Equal'.  It was the safest place I've lived in my life.  After that, we moved to Dallas; it was hell."  She now resides contentedly in the Fairmount area. 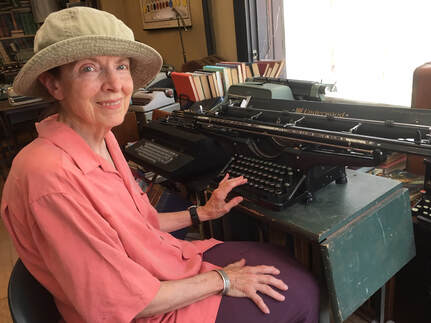 She needed to put herself through art school, so after graduating high school in Perkiomen, Bea Weidner snagged a job at an accountant's office in Norristown.
​    Our Underwood typewriter--with its 26"-wide carriage--reminded her of that job. "I had to write complicated financial reports on very wide ledgers.  I was not allowed to make a mistake, not one.  There was no White Out, no way to cover or erase an error.  I don't know how I did it, but I did not make mistakes."  Bea went on to become a freelance book and advertising illustrator.  She lives in Mt Airy.

Four Strikes and You're Out

Grandma was an IBM Selectric Mechanic

​"We Practiced in the Air

​Love:  A Bus by Any Other Name

When Every Letter Matters

My Mother Paid “On Time”

My Summer Job in Typewriters

A Community Typewriter in Cambridge

We Were Not Allowed to Take Typing Class